I can not believe the year has flown fast to September already and I still have a lot on my TBR to finish before the end of this year! God help me!

This month is coming with quite a number of very interesting titles from a variety of genres and authors both old and new. Here are my top 10 books expected to be released this month. There is definitely something for everyone and I urge you to look out for theses titles and read them.

1. Frankly In Love by David Yoon 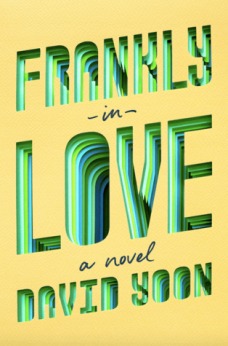 Publisher’s Blurb: High school senior Frank Li is a Limbo–his term for Korean-American kids who find themselves caught between their parents’ traditional expectations and their own Southern California upbringing. His parents have one rule when it comes to romance–“Date Korean”–which proves complicated when Frank falls for Brit Means, who is smart, beautiful–and white. Fellow Limbo Joy Song is in a similar predicament, and so they make a pact: they’ll pretend to date each other in order to gain their freedom. Frank thinks it’s the perfect plan, but in the end, Frank and Joy’s fake-dating maneuver leaves him wondering if he ever really understood love–or himself–at all.

2. The Ten Thousand Doors Of January By Alix E. Harrow 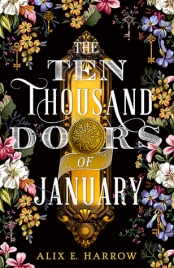 Publisher’s Blurb: In the early 1900s, a young woman embarks on a fantastical journey of self-discovery after finding a mysterious book in this captivating and lyrical debut. In a sprawling mansion filled with peculiar treasures, January Scaller is a curiosity herself. As the ward of the wealthy Mr. Locke, she feels little different from the artifacts that decorate the halls: carefully maintained, largely ignored, and utterly out of place. Then she finds a strange book. A book that carries the scent of other worlds, and tells a tale of secret doors, of love, adventure and danger. Each page turn reveals impossible truths about the world and January discovers a story increasingly entwined with her own. Lush and richly imagined, a tale of impossible journeys, unforgettable love, and the enduring power of stories awaits in Alix E. Harrow’s spellbinding debut–step inside and discover its magic.

3. The Institute by Stephen King 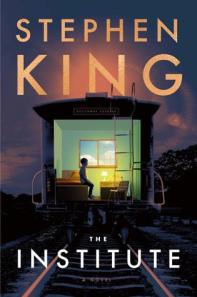 Publisher’s Blurb: In the middle of the night, in a house on a quiet street in suburban Minneapolis, intruders silently murder Luke Ellis’s parents and load him into a black SUV. The operation takes less than two minutes. Luke will wake up at The Institute, in a room that looks just like his own, except there’s no window. And outside his door are other doors, behind which are other kids with special talents—telekinesis and telepathy—who got to this place the same way Luke did: Kalisha, Nick, George, Iris, and ten-year-old Avery Dixon. They are all in Front Half. Others, Luke learns, graduated to Back Half, “like the roach motel,” Kalisha says. “You check in, but you don’t check out.”
In this most sinister of institutions, the director, Mrs. Sigsby, and her staff are ruthlessly dedicated to extracting from these children the force of their extranormal gifts. There are no scruples here. If you go along, you get tokens for the vending machines. If you don’t, punishment is brutal. As each new victim disappears to Back Half, Luke becomes more and more desperate to get out and get help. But no one has ever escaped from the Institute. As psychically terrifying as Firestarter, and with the spectacular kid power of It, The Institute is Stephen King’s gut-wrenchingly dramatic story of good vs. evil in a world where the good guys don’t always win. 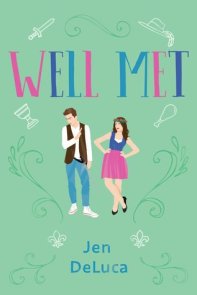 Publisher’s Blurb: All’s faire in love and war for two sworn enemies who indulge in a harmless flirtation in a laugh-out-loud rom-com from debut author, Jen DeLuca.
Emily knew there would be strings attached when she relocated to the small town of Willow Creek, Maryland, for the summer to help her sister recover from an accident, but who could anticipate getting roped into volunteering for the local Renaissance Faire alongside her teenaged niece? Or that the irritating and inscrutable schoolteacher in charge of the volunteers would be so annoying that she finds it impossible to stop thinking about him? The faire is Simon’s family legacy and from the start he makes clear he doesn’t have time for Emily’s lighthearted approach to life, her oddball Shakespeare conspiracy theories, or her endless suggestions for new acts to shake things up. Yet on the faire grounds he becomes a different person, flirting freely with Emily when she’s in her revealing wench’s costume. But is this attraction real, or just part of the characters they’re portraying? This summer was only ever supposed to be a pit stop on the way to somewhere else for Emily, but soon she can’t seem to shake the fantasy of establishing something more with Simon, or a permanent home of her own in Willow Creek.

5. The Testaments (The Handmaid’s Tale #2) by Margaret Atwood 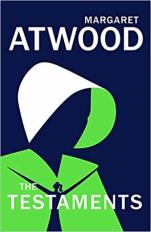 Publisher’s Blurb: And so I step up, into the darkness within; or else the light.
When the van door slammed on Offred’s future at the end of The Handmaid’s Tale, readers had no way of telling what lay ahead. With The Testaments, the wait is over. Margaret Atwood’s sequel picks up the story 15 years after Offred stepped into the unknown, with the explosive testaments of three female narrators from Gilead. ‘Dear Readers: Everything you’ve ever asked me about Gilead and its inner workings is the inspiration for this book. Well, almost everything! The other inspiration is the world we’ve been living in.’ Margaret Atwood. 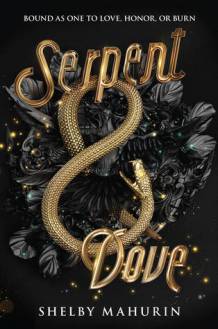 Publisher’s Blurb: Two years ago, Louise le Blanc fled her coven and took shelter in the city of Cesarine, forsaking all magic and living off whatever she could steal. There, witches like Lou are hunted. They are feared. And they are burned. Sworn to the Church as a Chasseur, Reid Diggory has lived his life by one principle: thou shalt not suffer a witch to live. His path was never meant to cross with Lou’s, but a wicked stunt forces them into an impossible union—holy matrimony. The war between witches and Church is an ancient one, and Lou’s most dangerous enemies bring a fate worse than fire. Unable to ignore her growing feelings, yet powerless to change what she is, a choice must be made. And love makes fools of us all.

7. Out Of Darkness: Shinning Light By Petina Gappah 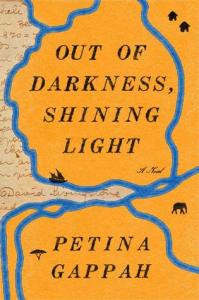 Publisher’s Blurb: “This is how we carried out of Africa the poor broken body of Bwana Daudi, the Doctor, David Livingstone, so that he could be borne across the sea and buried in his own land.” So begins Petina Gappah’s powerful novel of exploration and adventure in nineteenth-century Africa—the captivating story of the loyal men and women who carried explorer and missionary Dr. Livingstone’s body, his papers and maps, fifteen hundred miles across the continent of Africa, so his remains could be returned home to England and his work preserved there. Narrated by Halima, the doctor’s sharp-tongued cook, and Jacob Wainwright, a rigidly pious freed slave, this is a story that encompasses all of the hypocrisy of slavery and colonization—the hypocrisy at the core of the human heart—while celebrating resilience, loyalty, and love.

8. The Secrets We Kept By Lara Prescott 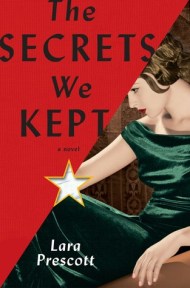 Publisher’s Blurb: A thrilling tale of secretaries turned spies, of love and duty, and of sacrifice—inspired by the true story of the CIA plot to infiltrate the hearts and minds of Soviet Russia, not with propaganda, but with the greatest love story of the twentieth century: Doctor Zhivago. At the height of the Cold War, two secretaries are pulled out of the typing pool at the CIA and given the assignment of a lifetime. Their mission: to smuggle Doctor Zhivago out of the USSR, where no one dare publish it, and help Pasternak’s magnum opus make its way into print around the world. Glamorous and sophisticated Sally Forrester is a seasoned spy who has honed her gift for deceit all over the world–using her magnetism and charm to pry secrets out of powerful men. Irina is a complete novice, and under Sally’s tutelage quickly learns how to blend in, make drops, and invisibly ferry classified documents. The Secrets We Kept combines a legendary literary love story—the decades-long affair between Pasternak and his mistress and muse, Olga Ivinskaya, who was sent to the Gulag and inspired Zhivago’s heroine, Lara—with a narrative about two women empowered to lead lives of extraordinary intrigue and risk. From Pasternak’s country estate outside Moscow to the brutalities of the Gulag, from Washington, D.C. to Paris and Milan, The Secrets We Kept captures a watershed moment in the history of literature—told with soaring emotional intensity and captivating historical detail. And at the center of this unforgettable debut is the powerful belief that a piece of art can change the world.

9. Red At The Bone By Jacqueline Woodson 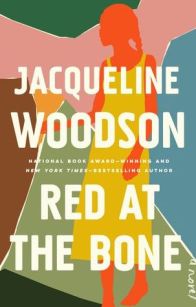 Publisher’s Blurb: Moving forward and backward in time, Jacqueline Woodson’s taut and powerful new novel uncovers the role that history and community have played in the experiences, decisions, and relationships of these families, and in the life of the new child. As the book opens in 2001, it is the evening of sixteen-year-old Melody’s coming of age ceremony in her grandparents’ Brooklyn brownstone. Watched lovingly by her relatives and friends, making her entrance to the music of Prince, she wears a special custom-made dress. But the event is not without poignancy. Sixteen years earlier, that very dress was measured and sewn for a different wearer: Melody’s mother, for her own ceremony– a celebration that ultimately never took place. Unfurling the history of Melody’s parents and grandparents to show how they all arrived at this moment, Woodson considers not just their ambitions and successes but also the costs, the tolls they’ve paid for striving to overcome expectations and escape the pull of history. As it explores sexual desire and identity, ambition, gentrification, education, class and status, and the life-altering facts of parenthood, Red at the Bone most strikingly looks at the ways in which young people must so often make long-lasting decisions about their lives—even before they have begun to figure out who they are and what they want to be. 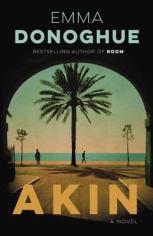 Publisher’s Blurb: A retired New York professor’s life is thrown into chaos when he takes a young great-nephew to the French Riviera, in hopes of uncovering his own mother’s wartime secrets in the next masterpiece from New York Times bestselling author Emma Donoghue. Noah Selvaggio is a retired chemistry professor and widower living on the Upper West Side, but born in the South of France. He is days away from his first visit back to Nice since he was a child, bringing with him a handful of puzzling photos he’s discovered from his mother’s wartime years. But he receives a call from social services: Noah is the closest available relative of an eleven-year-old great-nephew he’s never met, who urgently needs someone to look after him. Out of a feeling of obligation, Noah agrees to take Michael along on his trip.  Much has changed in this famously charming seaside mecca, still haunted by memories of the Nazi occupation. The unlikely duo, suffering from jet lag and culture shock, bicker about everything from steak frites to screen time. But Noah gradually comes to appreciate the boy’s truculent wit, and Michael’s ease with tech and sharp eye help Noah unearth troubling details about their family’s past. Both come to grasp the risks people in all eras have run for their loved ones, and find they are more akin than they knew. Written with all the tenderness and psychological intensity that made Room an international bestseller, Akin is a funny, heart-wrenching tale of an old man and a boy, born two generations apart, who unpick their painful story and start to write a new one together.

One thought on “Top 10 Books To Be Released This Month: September 2019”