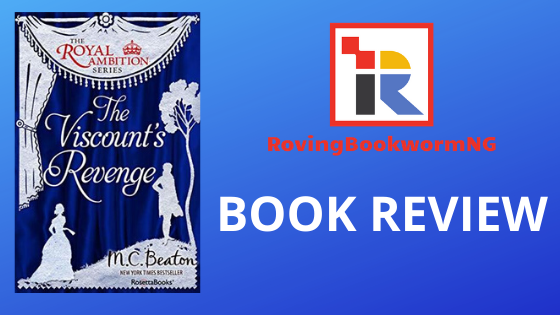 This is the fourth book in M. C. Beaton’s “Royal Ambition Series”. They are all stand-alone novels however, I have chosen to read them in the order they were written and published. To read my review on the first three books in this series, click  “Book Reviews” on the menu tab of the homepage of this blog.

“The Viscount’s Revenge” is another fast paced, page turner where the Colby twins, Amanda and Richard who were orphaned at a young age and cared for by their poor Aunt Matilda have again lost their guardian, Authur Cogswell a close friend of their late father who provided for them until his death. His nephew, Mr Brotherington who is his heir does not want anything to do with them and they are forced to find a way to fend for themselves. By a stroke of luck, they are taken in by Aunt Matilda’s old wealthy friend where Amanda is to be companion to her daughter Lady Susan but ends up falling for her handsome brother, Lord Hawksborough who is already engaged to be married. This comes after the twins out of sheer desperation have committed a crime and have to hide their secret especially from their new and generous guardians.

This is an interesting and entertaining regency romance story with a lot of action, suspense and humor. M. C. Beaton does her magic again by bringing her characters to live in a believable and humorist manner. I love the bits of history that is spread all over the story which gives a very real picture of the times in regency England. I enjoyed reading about the preparations to attend balls, dinners and card parties. The era was also popular for gambling and the men were quite fashionable and vain, probably more than the women which is interesting to know.

My favorite character was Lord Hawksborough although he had his short comings and my worst was his fiancee Lady Mary Dane. Most of the characters were colorful and an interesting lot which made reading this book a pleasurable experiencereading.

I recommend this book to all romance lovers. This is also a clean read except for a scene of an attempted rape otherwise, it can go for teenage readers.

The Author: Marion Chesney was born on 1936 in Glasgow, Scotland, UK, and started her first job as a bookseller in charge of the fiction department in John Smith & Sons Ltd. While bookselling, by chance, she got an offer from the Scottish Daily Mail to review variety shows and quickly rose to be their theatre critic. She left Smith’s to join Scottish Field magazine as a secretary in the advertising department, without any shorthand or typing, but quickly got the job of fashion editor instead. She then moved to the Scottish Daily Express where she reported mostly on crime. This was followed by a move to Fleet Street to the Daily Express where she became chief woman reporter. After marrying Harry Scott Gibbons and having a son, Charles, Marion went to the United States where Harry had been offered the job of editor of the Oyster Bay Guardian. When that didn’t work out, they went to Virginia and Marion worked as a waitress in a greasy spoon on the Jefferson Davies in Alexandria while Harry washed the dishes. Both then got jobs on Rupert Murdoch’s new tabloid, The Star, and moved to New York.