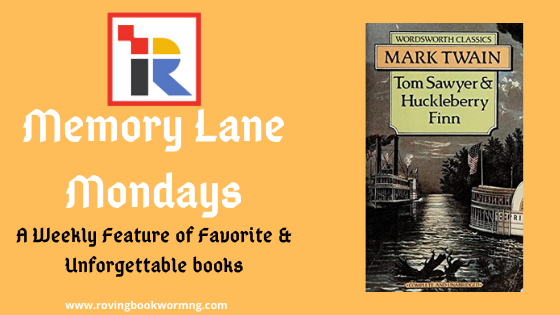 Welcome to Memory Lane Mondays!
This is a weekly feature of unforgettable books I have read in times past which have not had the chance to be reviewed on this blog as I read them a long time ago. Lets’ call them my personal classics. I will be featuring a new favorite every week and I hope you will be interested to read and enjoy some as I have.

These are definitely unforgettable classics on every level. Whenever I look at this book, I have this lovely nostalgic feelings from my childhood. These two stories both as books and TV series formed a huge part of my love for literature and reading in general. Out of the two, I would always pick the Huckleberry Finn story but this does not mean that the Tom Sawyer is a shabby story in any way. I am yet to find new age appropraite copies for my kids but I will surely get these books for them to enjoy the beauty of these classic stories and also have the same experience I had. I highly recommend this book to everyone. Who also read this book?

Tom Sawyer, a shrewd and adventurous boy, is as much at home in the respectable world of his Aunt Polly as in the self-reliant and parentless world of his friend Huck Finn. The two enjoy a series of adventures, accidentally witnessing a murder, establishing the innocence of the man wrongly accused, as well as being hunted by Injun Joe, the true murderer, eventually escaping and finding the treasure that Joe had buried.

Huckleberry Finn recounts the further adventures of Huck, who runs away from a drunken and brutal father, and meets up with the escaped slave Jim. They float down the Mississippi on a raft, participating in the lives of the characters they meet, witnessing corruption, moral decay and intellectual impoverishment.

Samuel Langhorne Clemens, better known by his pen name Mark Twain, was an American author and humorist. He is noted for his novels Adventures of Huckleberry Finn (1885), called “the Great American Novel”, and The Adventures of Tom Sawyer (1876).

Twain grew up in Hannibal, Missouri, which would later provide the setting for Huckleberry Finn and Tom Sawyer. He apprenticed with a printer. He also worked as a typesetter and contributed articles to his older brother Orion’s newspaper. After toiling as a printer in various cities, he became a master riverboat pilot on the Mississippi River, before heading west to join Orion. He was a failure at gold mining, so he next turned to journalism. While a reporter, he wrote a humorous story, “The Celebrated Jumping Frog of Calaveras County,” which proved to be very popular and brought him nationwide attention. His travelogues were also well-received. Twain had found his calling.

He achieved great success as a writer and public speaker. His wit and satire earned praise from critics and peers, and he was a friend to presidents, artists, industrialists, and European royalty.

However, he lacked financial acumen. Though he made a great deal of money from his writings and lectures, he squandered it on various ventures, in particular the Paige Compositor, and was forced to declare bankruptcy. With the help of Henry Huttleston Rogers, however, he eventually overcame his financial troubles. Twain worked hard to ensure that all of his creditors were paid in full, even though his bankruptcy had relieved him of the legal responsibility.

Born during a visit by Halley’s Comet, he died on its return. He was lauded as the “greatest American humorist of his age”, and William Faulkner called Twain “the father of American literature”.