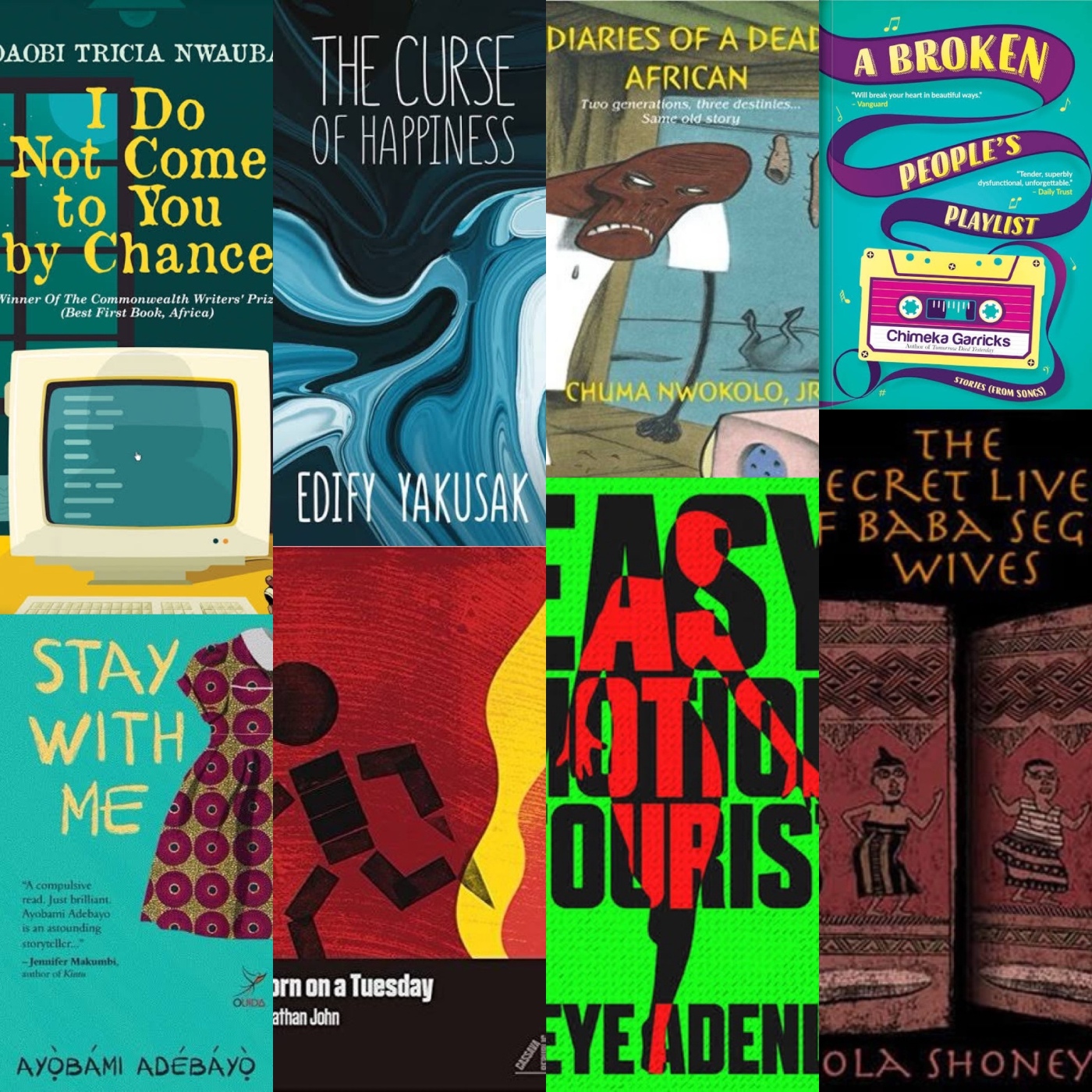 I have read quite a number of interesting books by Nigerian authors especially in recent years but these are my top 10 picks/recommendations. Here we go……. 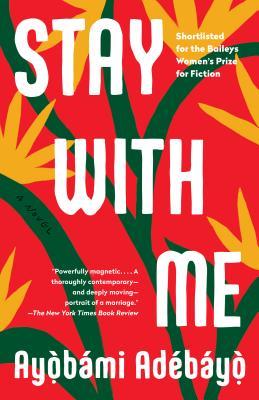 1. Stay With Me by Ayobami Adebayo

This celebrated, unforgettable first novel, shortlisted for the prestigious Women’s Prize for Fiction and set in Nigeria, gives voice to both husband and wife as they tell the story of their marriage–and the forces that threaten to tear it apart.

Yejide and Akin have been married since they met and fell in love at university. Though many expected Akin to take several wives, he and Yejide have always agreed: polygamy is not for them. But four years into their marriage–after consulting fertility doctors and healers, trying strange teas and unlikely cures–Yejide is still not pregnant. She assumes she still has time–until her family arrives on her doorstep with a young woman they introduce as Akin’s second wife. Furious, shocked, and livid with jealousy, Yejide knows the only way to save her marriage is to get pregnant, which, finally, she does–but at a cost far greater than she could have dared to imagine. An electrifying novel of enormous emotional power, Stay With Me asks how much we can sacrifice for the sake of family. 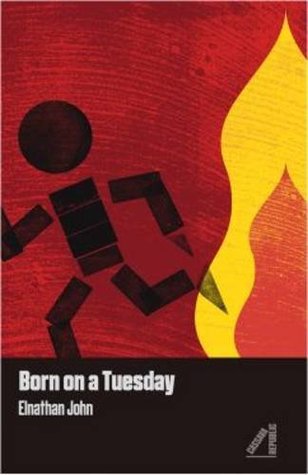 2. Born on a Tuesday by Elnathan John

From two-time Caine Prize finalist Elnathan John, a dynamic young voice from Nigeria, Born on a Tuesday is a stirring, starkly rendered first novel about a young boy struggling to find his place in a society that is fracturing along religious and political lines.

In far northwestern Nigeria, Dantala lives among a gang of street boys who sleep under a kuka tree. During the election, the boys are paid by the Small Party to cause trouble. When their attempt to burn down the opposition’s local headquarters ends in disaster, Dantala must run for his life, leaving his best friend behind. He makes his way to a mosque that provides him with food, shelter, and guidance. With his quick aptitude and modest nature, Dantala becomes a favored apprentice to the mosque’s sheikh. Before long, he is faced with a terrible conflict of loyalties, as one of the sheikh’s closest advisors begins to raise his own radical movement. When bloodshed erupts in the city around him, Dantala must decide what kind of Muslim—and what kind of man—he wants to be. Told in Dantala’s naïve, searching voice, this astonishing debut explores the ways in which young men are seduced by religious fundamentalism and violence. 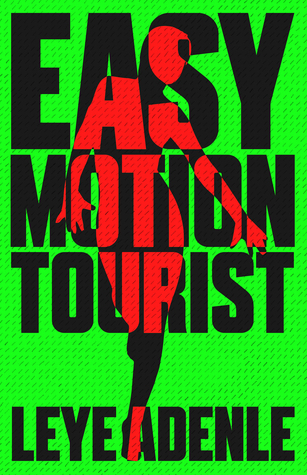 Easy Motion Tourist is a compelling crime novel set in contemporary Lagos. It features Guy Collins, a British hack who stumbles by chance into the murky underworld of the city. A woman’s mutilated body is discarded by the side of a club near one of the main hotels in Victoria Island. Collins, a bystander, is picked up by the police as a potential suspect. After experiencing the unpleasant realities of a Nigerian police cell, he is rescued by Amaka, a Pam Grier-esque Blaxploitation heroine with a saintly streak. As Collins discovers more of the darker aspects of what makes Lagos tick – including the clandestine trade in organs – he also falls slowly for Amaka. Little do they realise how the body parts business is wrapped up in the power and politics of the city. The novel features a motley cast of supporting characters, including a memorable duo of low-level Lagos gangsters, Knockout and Go-Slow. Easy Motion Tourist pulsates with the rhythms of Lagos, reeks of its open drains, and entertains from beginning to end. A modern thriller featuring a strong female protagonist, prepared to take on the Nigerian criminal world on her own. 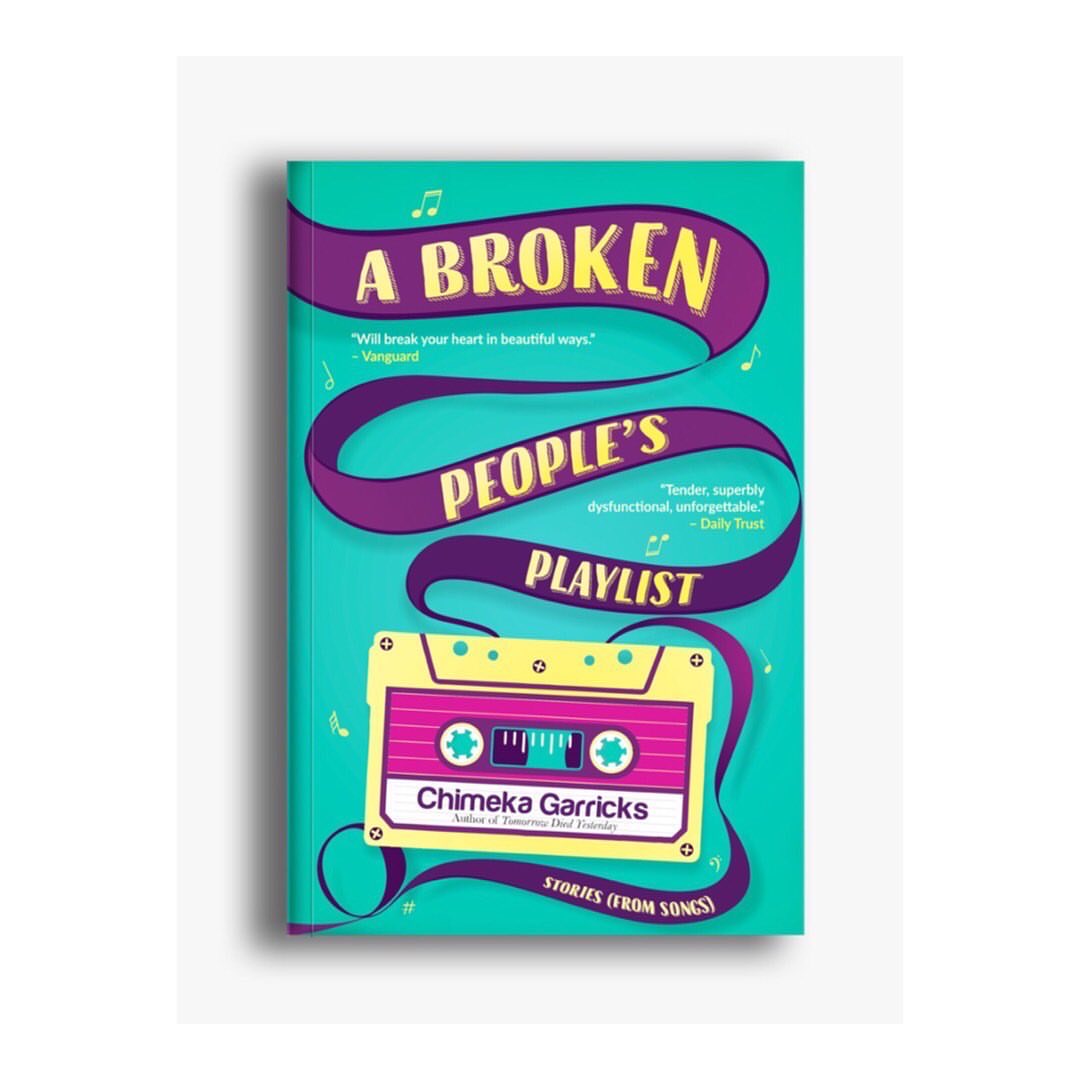 A Broken People’s Playlist is a collection of short stories with underlying themes so beautifully woven that each story flows into the other seamlessly. From its poignant beginning in “Lost Stars” a story about love and it’s fleeting, transient nature to the gritty, raw musical prose encapsulated in “In The City”, a tale of survival set in the alleyways of the waterside. A Broken People’s Playlist is a mosaic of stories about living, loving and hurting through very familiar sounds, in very familiar ways and finding healing in the most unlikely places.

The stories are also part-homage and part-love letter to Port Harcourt (the city which most of them are set in). The prose is distinctive as it is concise and unapologetically Nigerian. And because the collection is infused with the magic of evocative storytelling, everyone is promised a story, a character, to move or haunt them. 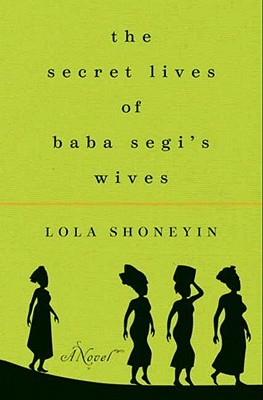 5. The secret Lives of Baba Segi’s Wives by Lola Shoneyin

African-born poet Lola Shoneyin makes her fiction debut with The Secret Lives of Babi Segi’s Wives, a perceptive, entertaining, and eye-opening novel of polygamy in modern-day Nigeria. The struggles, rivalries, intricate family politics, and the interplay of personalities and relationships within the complex private world of a polygamous union come to life in The Secret Lives of Baba Segi’s Wives—Big Love and The 19th Wife set against a contemporary African background. 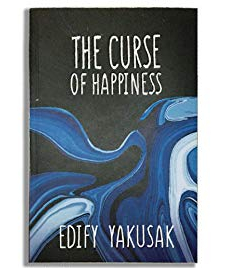 6. The Curse of Happiness by Edify Yakusak

The Curse of Happiness is a collection of short stories that finds ordinary people struggling and sometimes failing in extraordinary circumstances. From a woman faced with a long-awaited but ultimately underwhelming miracle in “Baby Blue Joy” to a man who finds himself face to face with humanity’s most terrifying manifestation, an enraged mob, in “What is mine is Yours”.

Yakusak stretches the limits of the normal human perception of the decisions people take in situations beyond their control. It’s an in-depth examination of the human psyche that is both intriguing and disturbing on a level that interacts with the inner reaches of our subconscious. The Curse of Happiness weaves exciting stories of how normalcy is a luxury in reality; one we often take for granted. 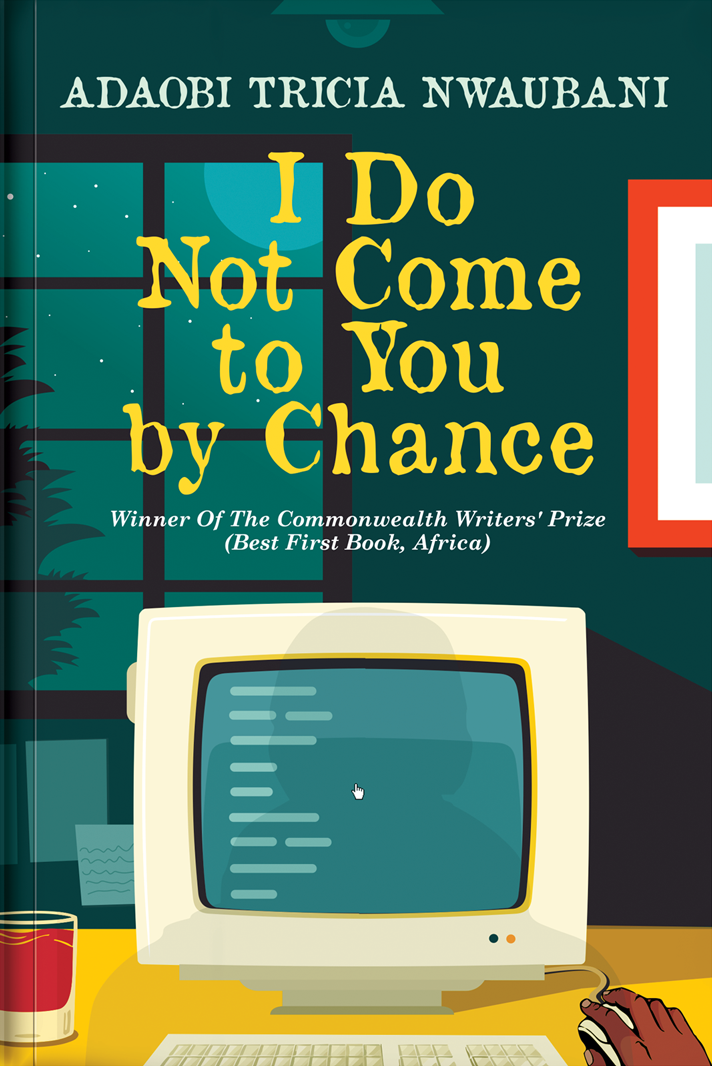 7. I Do Not Come To You By Chance by Adaobi Tricia Nwaubani

A deeply moving debut novel set amid the perilous world of Nigerian email scams, I Do Not Come to You by Chance tells the story of one young man and the family who loves him.

Being the opara of the family, Kingsley Ibe is entitled to certain privileges–a piece of meat in his egusi soup, a party to celebrate his graduation from university. As first son, he has responsibilities, too. But times are bad in Nigeria, and life is hard. Unable to find work, Kingsley cannot take on the duty of training his younger siblings, nor can he provide his parents with financial peace in their retirement. And then there is Ola. Dear, sweet Ola, the sugar in Kingsley’s tea. It does not seem to matter that he loves her deeply; he cannot afford her bride price.

It hasn’t always been like this. For much of his young life, Kingsley believed that education was everything, that through wisdom, all things were possible. Now he worries that without a “long-leg”–someone who knows someone who can help him–his degrees will do nothing but adorn the walls of his parents’ low-rent house. And when a tragedy befalls his family, Kingsley learns the hardest lesson of all: education may be the language of success in Nigeria, but it’s money that does the talking.

Unconditional family support may be the way in Nigeria, but when Kingsley turns to his Uncle Boniface for help, he learns that charity may come with strings attached. Boniface–aka Cash Daddy–is an exuberant character who suffers from elephantiasis of the pocket. He’s also rumored to run a successful empire of email scams. But he can help. With Cash Daddy’s intervention, Kingsley and his family can be as safe as a tortoise in its shell. It’s up to Kingsley now to reconcile his passion for knowledge with his hunger for money, and to fully assume his role of first son. But can he do it without being drawn into this outlandish mileu? 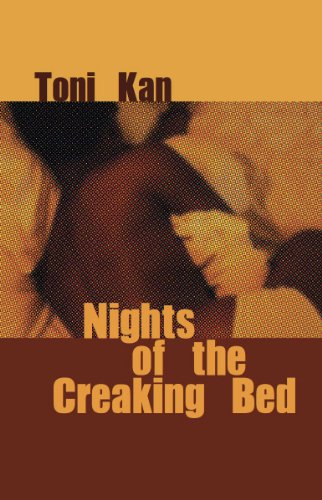 8.  Nights of a Creaking Bed by Toni Kan

Nights of the Creaking Bed is full of colourful characters involved in affecting dramas: a girl who is rejected in love because she has three brothers to look after; a middle aged housewife who finds love again but has an impossible decision to make; a young man who can’t get the image of his naked, beautiful mother out of his mind; a child so poor he has to hawk onions on Christmas day – and many others. Some, initially full of hope, find their lives blighted by the cruelty of others, or by being in the wrong place at the wrong time, or by just not knowing the “right” people.

Corruption, religious intolerance, gratuitous violence, the irresponsible attitudes of some men to their offspring and the importance of joy are some of the big themes that underlie this memorable collection. 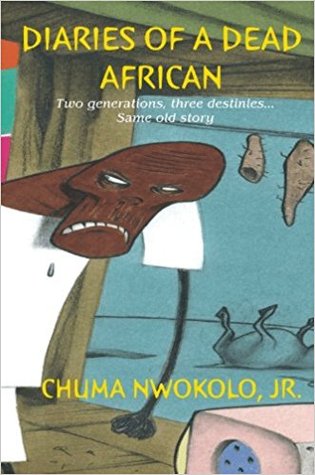 9. Diaries of a Dead African by Chuma Nwokolo

Diaries of a Dead African is a merciless comedy that explores the life-threatening situations of three protagonists, the farmer Meme Jumai and his two sons – Abel (failed writer) and Calamatus (aspiring conman).

Meme’s wife has left him with the bulk of his barn. He has a few tubers to last until harvest. Can he stretch it? Will his friends and relatives help out? Calamatus’ break has finally come after an apprenticeship to a con-artist. Can he survive wealth as readily as he did, poverty? Finally Abel’s manuscripts are attracting attention, but not, as he discovers, for their literary value… his fondest dreams were on the verge of realisation, yet his father had died at 50 and his brother at 25. How to outlive them both, without fleeing the very opportunities he had craved all his life…

Its 2004 Port Harcourt, Nigeria at the height of the kidnap of oil workers in the Niger delta, a kidnapping goes awry and four lives are reconnected. Douye aka Doughboy the career militant responsible for the crime. Amaibi the gentle university professor / eco-warrior accused. Kaniye the lawyer turned restaurateur who tries to get him off and Tubo an amoral oil company executive. Against a backdrop of corrupt practises, failed systems and injustice, these four friends tell the story of oil in a region and its effects on local communities and the Nigerian larger society.