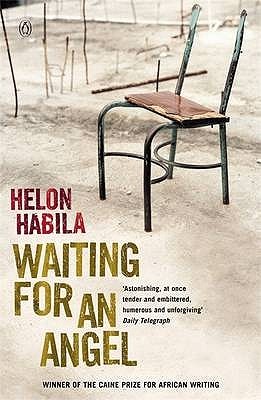 ‘Waiting For An Angel’ by Helon Habila

This is a classic of mine written by a Nigerian author and my first by him. It is a story that clearly mirrors the state of our country during the military rule from the eyes of a young journalist who is writing a novel. This very relatable and vivid narrative has always remained in my mind and is one of the unforgettable reads I have ever come across.

Have you read this book? I highly recommend.

Lomba is a young journalist living in Lagos under Nigeria’s brutal military regime. His mind is full of soul music and girls and the novel he’s writing. Yet when his room-mate goes mad and is beaten up by soldiers, his first love is forced to marry a man she doesn’t want, and his neighbours decide to hold a demo that is bound to lead to a riot, Lomba realizes that he can no longer bury his head in the sand. It’s time to write the truth about this reign of terror ..

Helon Habila was born in Nigeria in 1967. He studied literature at the University of Jos and taught at the Federal Polytechnic Bauchi, before moving to Lagos to work as a journalist. In Lagos he wrote his first novel, Waiting for an Angel, which won the Caine Prize in 2001. Waiting for an Angel has been translated into many languages including Dutch, Italian, Swedish, and French.

In 2002, he moved to England to become the African Writing Fellow at the University of East Anglia. After his fellowship he enrolled for a PhD in Creative Writing. His writing has won many prizes including the Commonwealth Writers Prize, 2003. In 2005-2006 he was the first Chinua Achebe Fellow at Bard College in New York. He is a contributing editor to the Virginia Quarterly Review, and in 2006 he co-edited the British Council’s anthology, NW14: The Anthology of New Writing, Volume 14. His second novel, Measuring Time, was published in February 2007.