This week I am anticipating the release of a book by Angela Hunt, one of the authors I read quite a number of her books this year and would love to read something by her again.

The book is titled:

A Woman Of Words by Angela Hunt 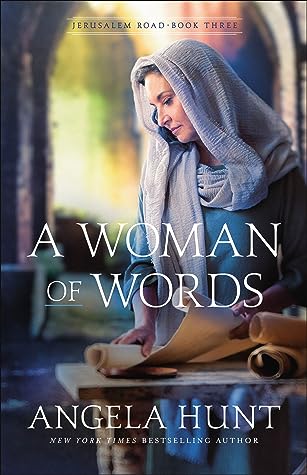 Disciple Matthew, a former tax collector, is invited to work with Peter, James, and John in Jerusalem. He dreams of preaching and performing miracles like his fellow apostles, but he finds his dreams postponed because of a request from Yeshua’s mother. Well aware of the passing years, Mary asks Matthew to help her record the stories of Yeshua while the eyewitnesses are still alive. Reluctantly, he agrees, though the longer he and Mary work together, the more difficult their task becomes. Not only are they pressured by opposition from friends and foes alike, but Gaius Caesar, better known as Caligula, is determined to raise a statue of himself in the Holy Temple, even if it means killing every man in Israel. As Matthew works to save his people, Mary encourages him to come to terms with issues from his past. When they finally near the completion of their project, Matthew realizes that the job he reluctantly accepted might be his God-given destiny.

Christy-Award winner Angela Hunt writes for readers who have learned to expect the unexpected in novels from this versatile author. With over three million copies of her books sold worldwide, she is the best-selling author of more than 100 works ranging from picture books (The Tale of Three Trees) to novels.

Now that her two children have reached their thirties, Angie and her husband live in Florida with Very Big Dogs (a direct result of watching Turner and Hooch and Sandlot too many times). This affinity for mastiffs has not been without its rewards–one of their dogs was featured on Live with Regis and Kelly as the second-largest canine in America. Their dog received this dubious honor after an all-expenses-paid trip to Manhattan for the dog and the Hunts, complete with VIP air travel and a stretch limo in which they toured New York City.

Afterward, the dog gave out pawtographs at the airport.

Angela admits to being fascinated by animals, medicine, psychology, unexplained phenomena, and “just about everything” except sports. Books, she says, have always shaped her life— in the fifth grade she learned how to flirt from reading Gone with the Wind.

Her books have won the coveted Christy Award, several Angel Awards from Excellence in Media, and the Gold and Silver Medallions from Foreword Magazine’s Book of the Year Award. In 2007, her novel The Note was featured as a Christmas movie on the Hallmark channel. Romantic Times Book Club presented her with a Lifetime Achievement Award in 2006.

In 2006, Angela completed her Master of Biblical Studies in Theology degree and completed her second doctorate in 2015. When she’s not home reading or writing, Angie often travels to teach writing workshops at schools and writers’ conferences. And to talk about her dogs, of course.