Here are my top 10 “must reads” to be released this month. There is a wide range of genres to choose from and I believe there will be something for everyone.

Check them out and hit the online or offline bookstores near you! 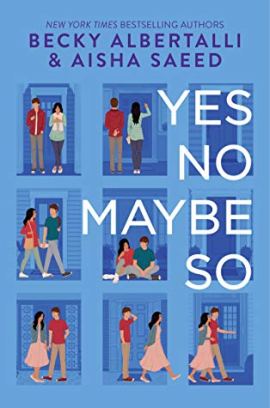 Blurb: Colum McCann’s most ambitious work to date, Apeirogon–named for a shape with a countably infinite number of sides–is a tour de force concerning friendship, love, loss, and belonging. Bassam Aramin is Palestinian. Rami Elhanan is Israeli. They inhabit a world of conflict that colors every aspect of their daily lives, from the roads they are allowed to drive on, to the schools their daughters, Abir and Smadar, each attend, to the checkpoints, both physical and emotional, they must negotiate. Their worlds shift irreparably after ten-year-old Abir is killed by a rubber bullet and thirteen-year-old Smadar becomes the victim of suicide bombers. When Bassam and Rami learn of each other’s stories, they recognize the loss that connects them and they attempt to use their grief as a weapon for peace. McCann crafts Apeirogon out of a universe of fictional and nonfictional material. He crosses centuries and continents, stitching together time, art, history, nature, and politics in a tale both heartbreaking and hopeful. Musical, cinematic, muscular, delicate, and soaring, Apeirogon is a novel for our time.

3. The Queen’s Fortune By Allison Pataki

Blurb: As the French revolution ravages the country, Desiree Clary is faced with the life-altering truth that the world she has known and loved is gone and it’s fallen on her to save her family from the guillotine. A chance encounter with Napoleon Bonaparte, the ambitious and charismatic young military prodigy, provides her answer. When her beloved sister Julie marries his brother Joseph, Desiree and Napoleon’s futures become irrevocably linked. Quickly entering into their own passionate, dizzying courtship that leads to a secret engagement, they vow to meet in the capital once his career has been secured. But her newly laid plans with Napoleon turn to sudden heartbreak, thanks to the rising star of Parisian society, Josephine de Beauharnais. Once again, Desiree’s life is turned on its head. Swept to the glittering halls of the French capital, Desiree is plunged into the inner circle of the new ruling class, becoming further entangled with Napoleon, his family, and the new Empress. But her fortunes shift once again when she meets Napoleon’s confidant and star general, the indomitable Jean-Baptiste Bernadotte. As the two men in Desiree’s life become political rivals and military foes, the question that arises is: must she choose between the love of her new husband and the love of her nation and its Emperor? From the lavish estates of the French Riviera to the raucous streets of Paris and Stockholm, Desiree finds herself at the epicenter of the rise and fall of an empire, navigating a constellation of political giants and dangerous, shifting alliances. Emerging from an impressionable girl into a fierce young woman, she discovers that to survive in this world she must learn to rely upon her instincts and her heart. Allison Pataki’s meticulously researched and brilliantly imagined novel sweeps readers into the unbelievable life of a woman almost lost to history—a woman who, despite the swells of a stunning life and a tumultuous time, not only adapts and survives but, ultimately, reigns at the helm of a dynasty that outlasts an empire. 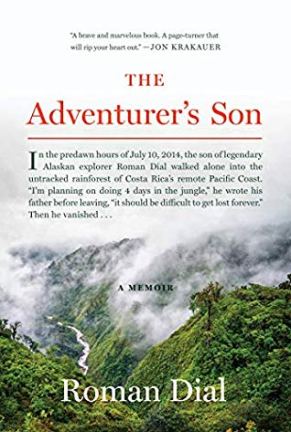 4. The Adventurer’s Son By Roman Dial

Blurb: In the predawn hours of July 10, 2014, twenty-seven-year-old Cody Roman Dial, the son of preeminent Alaskan scientist and National Geographic Explorer Roman Dial, walked alone into Corcovado National Park, an untracked rainforest along Costa Rica’s remote Pacific Coast that shelters miners, poachers, and drug smugglers. He carried a light backpack and machete. Before he left, he emailed his father: “I am not sure how long it will take me, but I’m planning on doing 4 days in the jungle and a day to walk out. I’ll be bounded by a trail to the west and the coast everywhere else, so it should be difficult to get lost forever.” They were the last words Dial received from his son. The Adventurer’s Son recreates the author’s two-year quest to learn the truth about his child’s disappearance. Immediately after Cody Roman’s planned departure date passed without a word from him, Dial set off for Costa Rica. As he trekked through the dense jungle, interviewing locals and searching for clues—the authorities suspected murder—the desperate father was forced to confront the deepest questions about his own life. Roman had raised his son to be fearless, to seek out adventure amid earth’s wildest places. Was he ultimately responsible for his son’s fate? A harrowing story of drama, adventure, and a father’s love for his son, set in the most beautiful and dangerous reaches of the planet, The Adventurer’s Son is a mystery, the memoir of a father and his son, and an unforgettable story of love and profound loss.

5. The Sun Down Motel By Simone St. James

Blurb: The secrets lurking in a rundown roadside motel ensnare a young woman, just as they did her aunt thirty-five years before, in this new atmospheric suspense novel from the national bestselling and award-winning author of The Broken Girls. Upstate NY, 1982. Every small town like Fell, New York, has a place like the Sun Down Motel. Some customers are from out of town, passing through on their way to someplace better. Some are locals, trying to hide their secrets. Viv Delaney works as the night clerk to pay for her move to New York City. But something isn’t right at the Sun Down, and before long she’s determined to uncover all of the secrets hidden…

6. Oona Out Of Order By Margarita Montimore

Blurb: It’s New Year’s Eve 1982, and Oona Lockhart has her whole life before her. At the stroke of midnight she will turn nineteen, and the year ahead promises to be one of consequence. Should she go to London to study economics, or remain at home in Brooklyn to pursue her passion for music and be with her boyfriend? As the countdown to the New Year begins, Oona faints and awakens thirty-two years in the future in her fifty-one-year-old body. Greeted by a friendly stranger in a beautiful house she’s told is her own, Oona learns that with each passing year she will leap to another age at random. And so begins Oona Out of Order…Hopping through decades, pop culture fads, and much-needed stock tips, Oona is still a young woman on the inside but ever changing on the outside. Who will she be next year? Philanthropist? Club Kid? World traveler? Wife to a man she’s never met? Oona Out of Order is a remarkably inventive novel that explores what it means to live a life fully in the moment, even if those moments are out of sequence. Surprising, magical, and heart-wrenching, Montimore has crafted an unforgettable story about the burdens of time, the endurance of love, and the power of family.

7. In a Field of Blue by Gemma Liviero

Blurb: England 1922. It’s been four years since Rudy’s brother Edgar went missing in war-torn France. Still deep in mourning and grappling with unanswered questions, Rudy and his mother struggle to move on. When the enigmatic Mariette arrives unexpectedly at the family’s manor claiming to be Edgar’s widow, and the mother of his child, Rudy urges her to stay, hoping she’ll shed light on the missing pieces. Captivated by Mariette, Rudy finds that their mutual loss and grief bind them…as does the possibility of new love. But Mariette’s revelations bring more questions than answers about Edgar’s death. Suspicions threaten to divide Rudy’s already fractured family, setting him on a quest for the truth that takes him from England to France and beyond. In his search, Rudy is forced to confront the tragedies of war and the realities of the brother he’s lost and the woman he’s found. Will the truth set him free to find peace, or will it forever shadow his future? 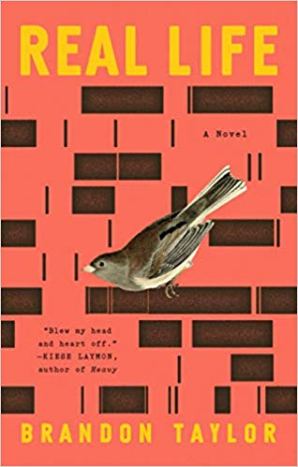 Blurb: A novel of rare emotional power that excavates the social intricacies of a late-summer weekend–and a lifetime of buried pain. Almost everything about Wallace, an introverted African-American transplant from Alabama, is at odds with the lakeside Midwestern university town where he is working toward a biochem degree. For reasons of self-preservation, Wallace has enforced a wary distance even within his own circle of friends–some dating each other, some dating women, some feigning straightness. But a series of confrontations with colleagues, and an unexpected encounter with a young straight man, conspire to fracture his defenses, while revealing hidden currents of resentment and desire that threaten the equilibrium of their community. Real Life is a gut punch of a novel, a story that asks if it’s ever really possible to overcome our private wounds and buried histories–and at what cost. 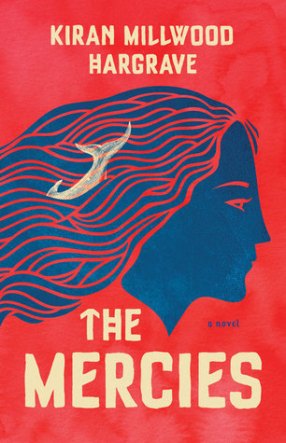 9. The Mercies By Kiran Millwood Hargrave

Blurb: Finnmark, Norway, 1617. Twenty-year-old Maren Bergensdatter stands on the craggy coast, watching the sea break into a sudden and reckless storm. Forty fishermen, including her brother and father, are drowned and left broken on the rocks below. With the menfolk wiped out, the women of the tiny Northern town of Vardø must fend for themselves. Three years later, a sinister figure arrives. Absalom Cornet comes from Scotland, where he burned witches in the northern isles. He brings with him his young Norwegian wife, Ursa, who is both heady with her husband’s authority and terrified by it. In Vardø, and in Maren, Ursa sees something she has never seen before: independent women. But Absalom sees only a place untouched by God and flooded with a mighty evil. As Maren and Ursa are pushed together and are drawn to one another in ways that surprise them both, the island begins to close in on them with Absalom’s iron rule threatening Vardø’s very existence. Inspired by the real events of the Vardø storm and the 1620 witch trials, The Mercies is a feminist story of love, evil, and obsession, set at the edge of civilization.

Blurb: Lisa Power is a tortured ghost of her former self. The author of a bestselling thriller called Thief River Falls, named after her rural Minnesota hometown, Lisa is secluded in her remote house as she struggles with the loss of her entire family: a series of tragedies she calls the “Dark Star.” Then a nameless runaway boy shows up at her door with a terrifying story: he’s just escaped death after witnessing a brutal murder—a crime the police want to cover up. Obsessed with the boy’s safety, Lisa resolves to expose this crime, but powerful men in Thief River Falls are desperate to get the boy back, and now they want her too. Lisa and her young visitor have nowhere to go as the trap closes around them. Still under the strange, unforgiving threat of the Dark Star, Lisa must find a way to save them both, or they’ll become the victims of another shocking tragedy she can’t foresee.

**Wishing you a lovely bookish February!